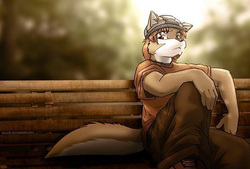 Background: Rezuland grew up in new earth with with his family, nearly idolizing the ICPSA. he tried out for it when he was old enough to apply, wanting to be as great as the heroes he hears about. he found he felt at home more in the air, so when he gained his dragon companion, he immediately applied for the scouts to do what he and his companion do best, be the best in the air that they can be. as to where he earned the nickname "deep paw", he earned it from close family and friends when he would be found digging holes and tunnels in the back yard while growing up, it just stuck with him even more when the affinity of hid dragon was discovered. it now is synonymous with earth and a firm foundation when describing him, as he prefers not to act without first setting down a plan of action. He also had a special set of armor manufactured which has a set of horns and wings matching his dragon, to further show their bond, where the wings can deploy in either a dire situation, or to hang glide along side his partner Barith. he will participate in a few practice hunts with Barith, wanting to hone his survivalist skills and prepare for the worst, but manly to turn into jerky for the other riders.

Personality: Rezuland is an inquisitive individual, some would even say skeptically. he is very outgoing and fun to be around with to those he's close to, but to others he may seem as though he's closed off and/or antisocial. he enjoys his time time spent on rounds and with his reptilian companion, at times taking night flights with his dragon when he thinks his captain isn't watching, using the special set of armor he had made or off honing his survival skills with Barith

Powers: Control of earth and lightning. telepathy with his team and his dragon. heightened senses and problem solving skills.

miscellaneous skills/abilities: Some hunting and survivalist skills taught to him by Barith. 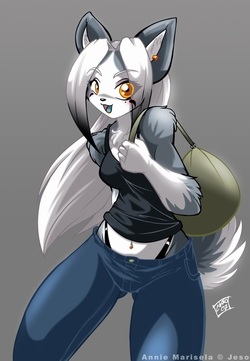 Eyes:Pale blue with flecks of silver

Background: Nuri was born apon the new earth within the ICPSA headquarters. Her intire childhood was focused on training to become a dragon master/rider.


Personality: Nuri is a very commanding female the air of a captian always surrounds her, force, deadly skill,determination and stubbornness seem to be her main emotions except when she is with her dragon.

Powers:Control of water,and Light. Teleapathy with others of her team and also her dragon. Nightvision.